The state of the gateway streets to downtown San Jose reflect overall neglect, if not active mismanagement, by City Hall. This is not a Covid-19 phenomenon. The areas have looked like this for years.

One of the pillars of our downtown business community, Jim Salata, from July 2020 started to organize series of clean-up events to try to direct focus on the shameful conditions downtown. As a result of the pressure, there are efforts underway thanks to Ash Kalra’s office. CalTrans has done some helpful cleanup. But the City is nowhere to be seen, and the underlying City Hall policies responsible for the problems are still unchanged.

Here are a few of Jim's musings after focusing on the southern and western gateways, along with some illustrative photos at each.

"We have momentum here and we have to do this again.  We will need help, not only from clean up but to put the heat on those responsible. We will have another cleanup very soon. We need neighborhood groups to join us. The overarching theme is Take Back San Jose and will have 'Operations' some small some large. NO politicians or ED’s or anyone (looking for PR) will be invited to the cleanups as we are not going to provide photo ops at our expense. They have failed us the people, if they hadn’t failed us the City would not look like it does that is it looks LIKE CRAP.  We are NOT going to clean up private property, that is the property owners responsibility.

"What we need to do is pressure the city and property owners to clean up their own CRAP (like 2nd at Reed, 2nd at San Salvador) including the sidewalks adjacent to their property. Code Enforcement is a dismal failure and we the people will now become “code enforcement” when it comes to cleanup.

"The irony is the City can waste money putting in “green mushrooms downtown” which chokes the lanes and confuses the hell out of everyone but they can’t figure out how to clean up and beautify?

"Do you know they put in very expensive bus ramps on San Fernando and apparently did not coordinate with VTA on route closures, so they took them out.

"Tell me why they run all the light rail trains with nobody in them? How about the million wasted on the homeless trailer fiasco? And on, and on. We don’t need to put up with this. The County wants to raise taxes… they tore down the Annex and the redwoods to build a parking lot. By now we would have had 160 homeless people housed.. The Annex was worth at least 8 million setting as it was.. no more taxes, they make bad decisions.

SAN JOSE — Finishing the long-stalled Santa Clara Valley Medical Center expansion will cost as much as an additional $126 million and take 14 more months as the project sits water-damaged and crawling with vermin, a county consultant reported this week.   https://www.mercurynews.com/2016/01/13/report-valley-medical-center-completion-will-take-up-to-126-million/

"Speaking of media, we stick with Len Ramirez KPIX 5 on this. He is of like mind and a good guy and a San Jose native who CARES… the Mercury News is holed up somewhere always trying to scare the stuffing  out of us about the pandemic."

Downtown San Jose on the south is bounded by the 280 freeway. Here, at this major downtown entrance, you'll see piles of trash, gigantic roaches, and the frequent homey campfires that often lead to a freeway fire. 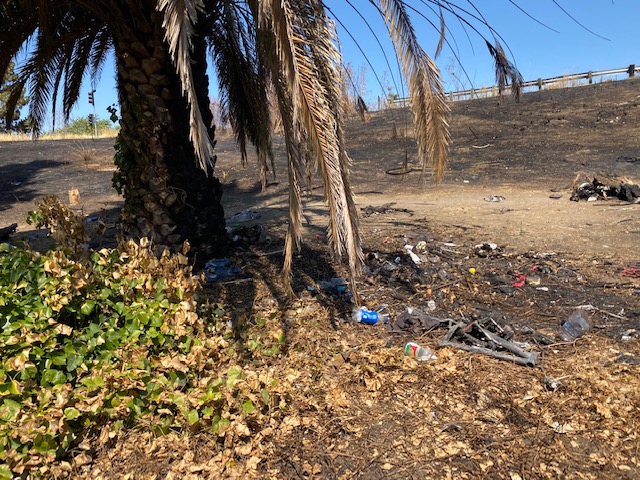 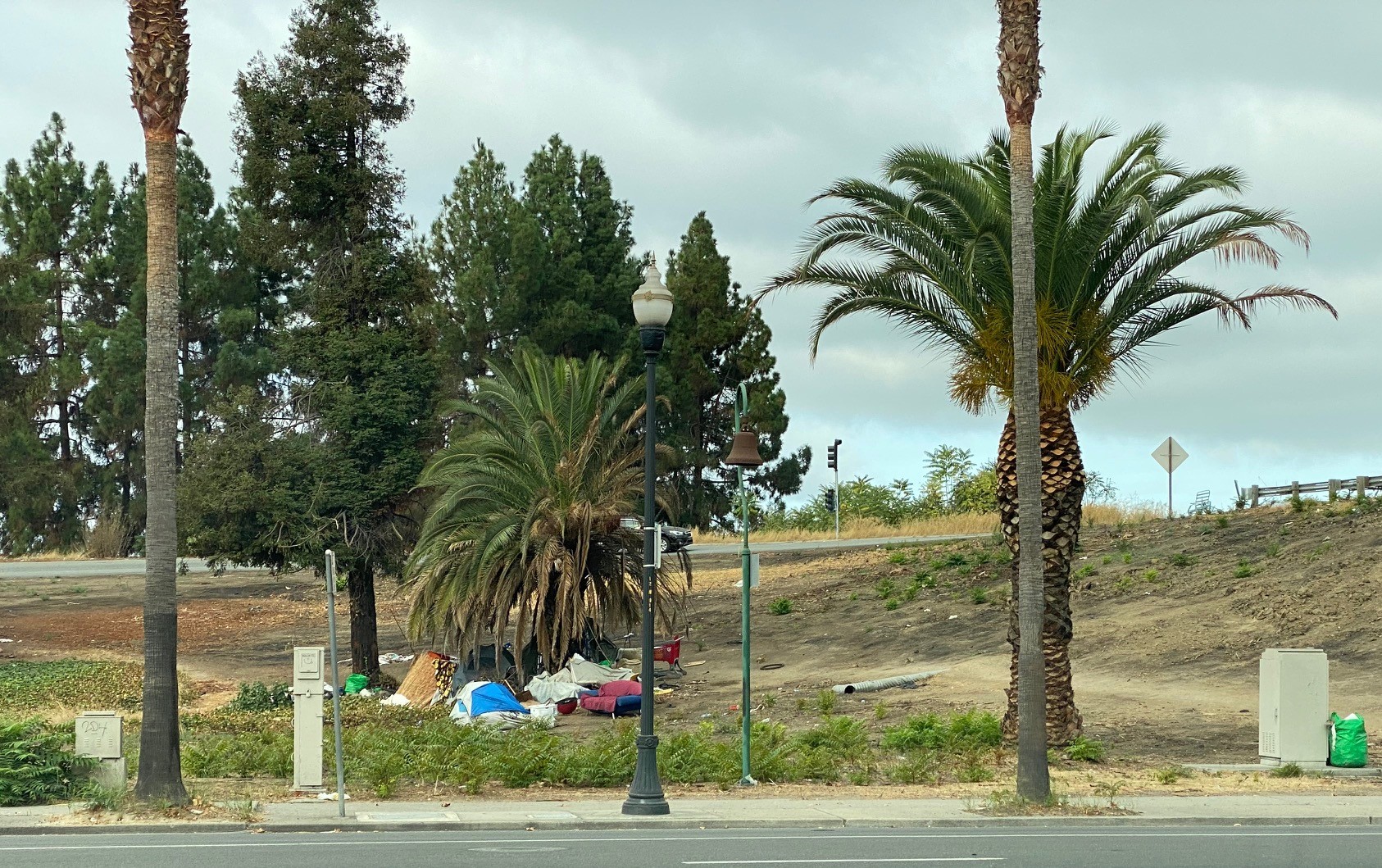 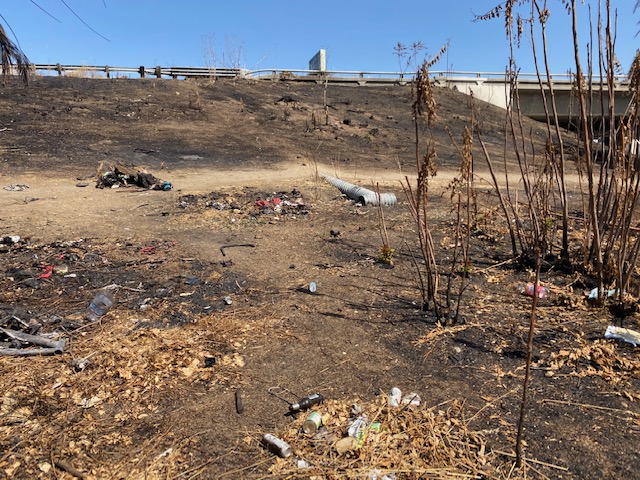 "Friday I was chatting with a friend of mine who wants to get involved and we were saying that there are poor neighborhoods that do not have a voice and maybe we out to look at helping them get rid of fire hazards so they don’t have to worry.  We had decided to meet this week and look at under 280 at Grant and Almaden where the big pile of debris and trash is. Unbelievably about 10 minutes later I received this sanjosespotlight link and I was astounded. These folks' house burned because of the exact thing we set out to do i.e. clean up because of fires.

"Yesterday at lunch I went over to scout out where our new volunteers were going to go for the next possible cleanup.  What I found was unbelievable. See attached photos. Backing up to the neighborhood, trash, brush, junk all the way up to the freeway. Unbelievable fire hazard.

"I spoke to one of the neighbors in depth. She said that there had been men fully naked laying in the weeds and  one man (clothed)  tried to coerce her granddaughters into climbing over the fence. The problem here is the place to hide because it is not maintained.

"She also told me of rat infestation.  I said I would get back to her on cleanup but I had not seen any rats.  Then I decided to walk around the overpass.. I walked past the shopping cart in the photo above and what the hell.. rats scurrying all over.. I caught two in the photo below. One by the green trash can and one left of the shoe. There were rats jumping all around the concrete pile.  Shocked the hell out of me.. I thought the lady might be making up stories.. but she wasn’t. Lunch time and rats right across from the bakery...

"Rats, are you kidding me? I heard about this in LA and NY but San Jose? What I am afraid of us we have barely scratched the surface here.  We need to MAKE THEM CLEAN THIS CRAP UP. Please write your council person asap. Before these piles are moved there must be extermination or all the rats will go to the neighborhood which we do not want.  I have grave misgivings about sending people to clean up and possibly get hurt but will work on that."

"We have video that shows the developer and his subs is dumping their construction waste in the alley, actually several videos. The city also has a camera that looks at this area but it seems it is never utilized. Code enforcement should enforce the fine.

"This is not the first time this has happened and he is using the city pickup service as his defacto debris box like these jerks around the rest of the San Jose, what a scumbag."

"It is patently obvious that Caltrans, like SCC, has no business being a landlord as they can’t take care of the freeways let alone manage a tenant...  The statement below “reminded Prestige” is like a slap on the hand to a child.  They should have written warnings that they are in violation of the terms of the lease. AND THEY ARE AND HAVE BEEN IN VIOLATION BIG TIME. In addition: City of SJ code enforcement should be and should have been all over this. Once again, our small businesses and private sector would never be able to get away with this as there is a double standard. Even with all that has been going down on this site Caltrans can’t get it to the next level and since our site meeting with you and Ash NOTHING has been done by Prestige. Violations are abundant as outlined below. These guys should be tossed off the site and have it cleaned up immediately.   Caltrans has been completely delinquent in taking on their obligations as a landlord and CSJ should be doing theirs.

"This is absolutely unacceptable in every way shape and form and requires immediate action long overdue. We should see a copy of a 10 day notice to Prestige ASAP. You cannot let Caltrans off the hook for this." 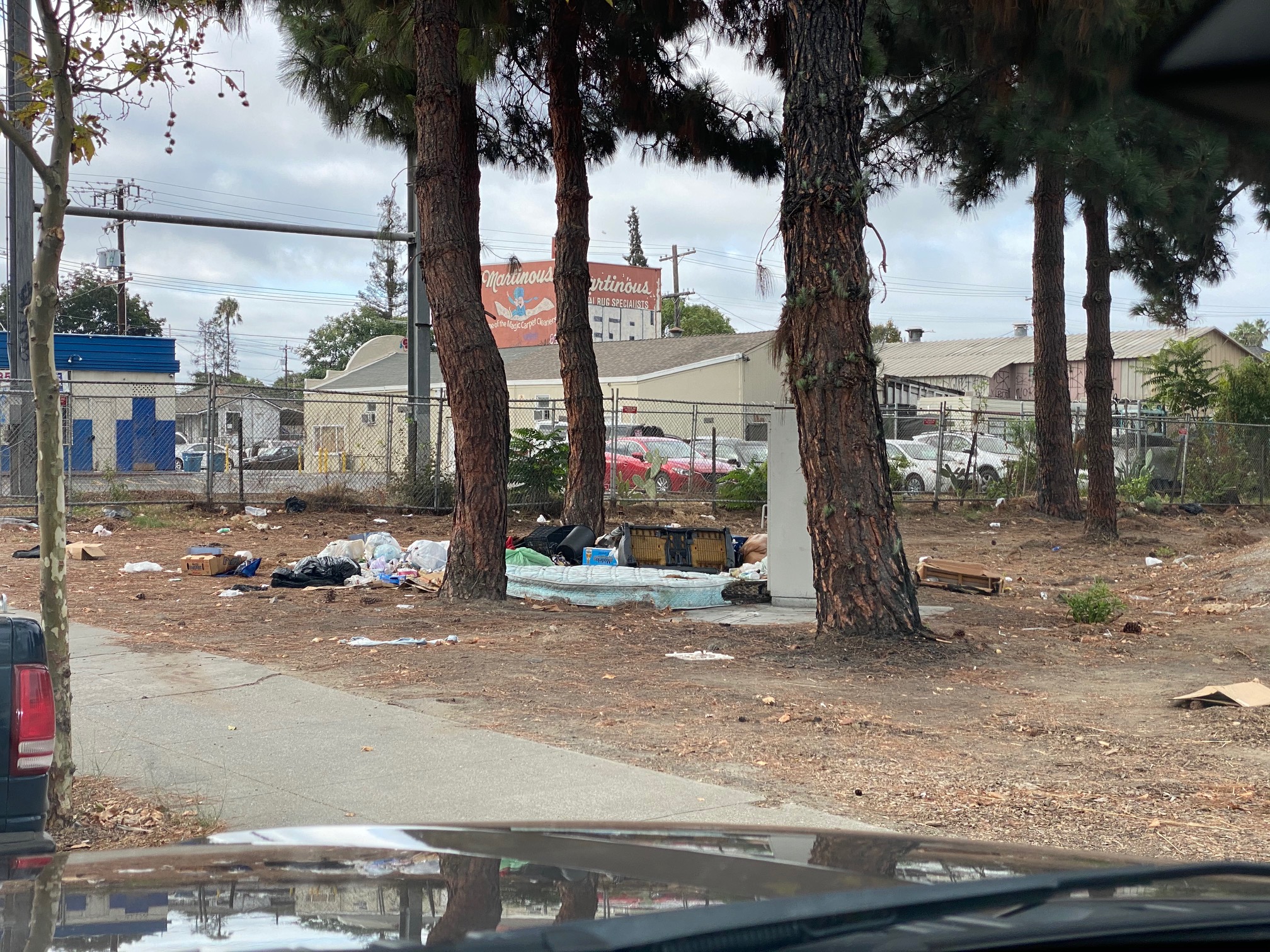 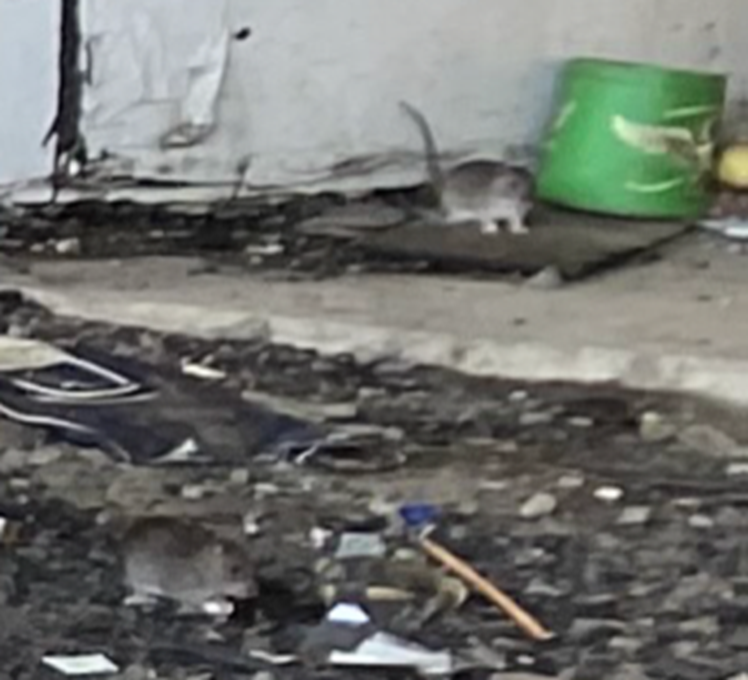 The corner of S 7th at 280 has, for decades, been home to every sort of debris and squatter. Back in the Golden Era, a local neighborhood volunteer cleanup group attacked the problem monthly, and the City and CalTrans made an effort to help.

By the 2010s, that help had dwindled to nothing. CalTrans stopped picking up the bags of trash the volunteers had collected for them. The City didn't get near the disaster.

For the last two years, a deranged "antiques" collector has taken up residence. And is he prolific! Rummaging through Dumpsters and dragging abandoned appliances from the street, he covers nearly an acre with debris. On the rare occasion where a City or State attempted a cleanup, this energetic (but clearly insane) gentleman can have the entire area reconstructed within a day!

San Jose City Hall's answer? Give up. That's just what Downtown has to look like. 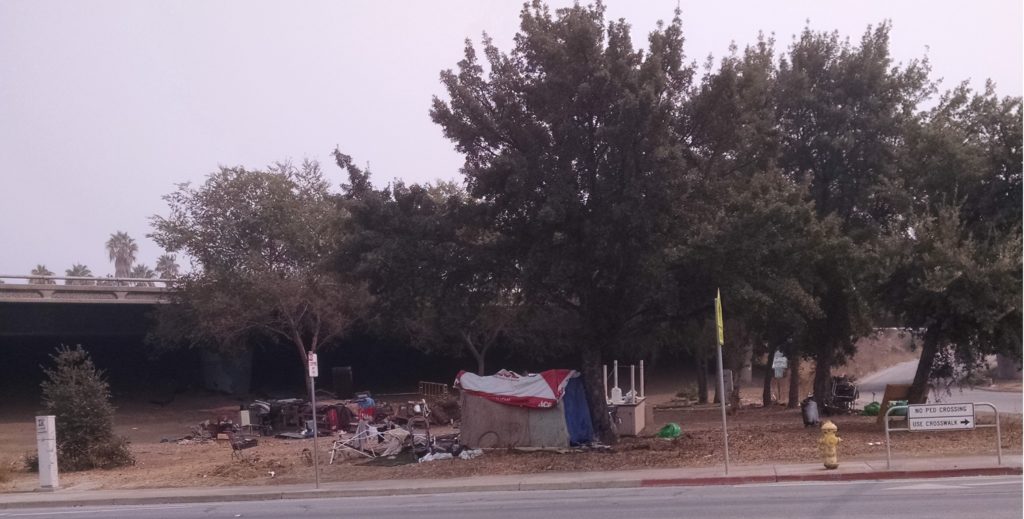 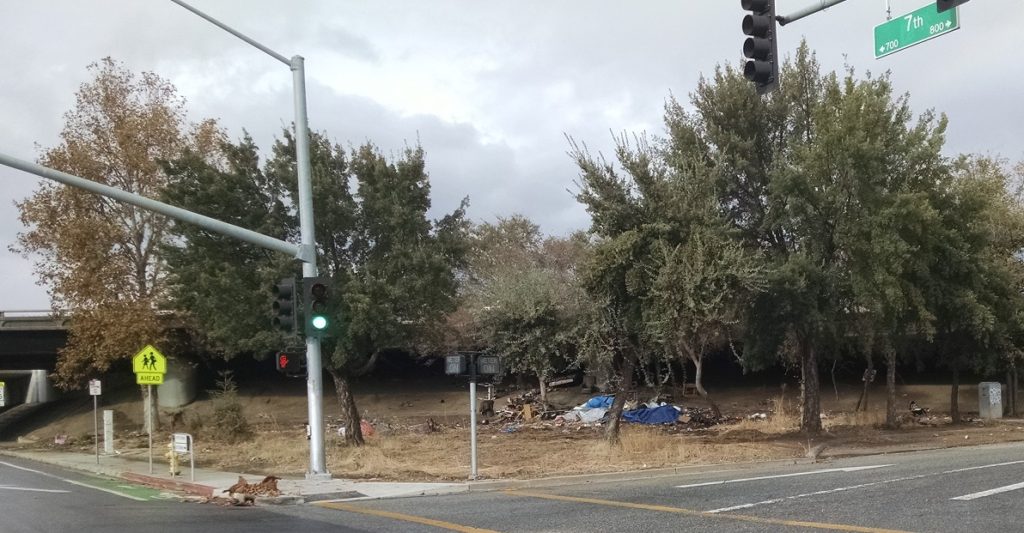 The blocks of the center of town, 1st St to 4th St, are basically abandoned. The City charges building owners in this area a special fee for a maintenance service to keep the area clean, so there is no debris. Just sadness.

Keep in mind that New City Hall was built at 4th St. The sadness appears to radiate outward from there... 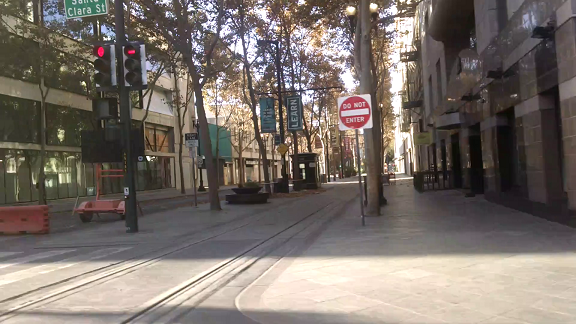 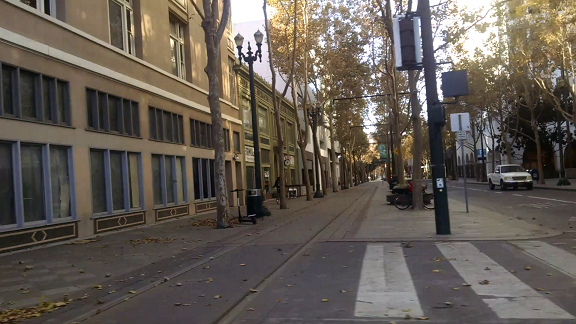 Views of the emptiness in between 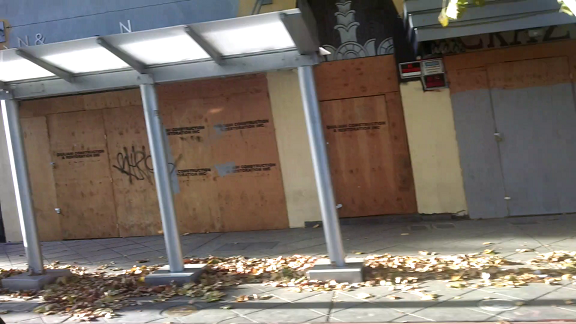 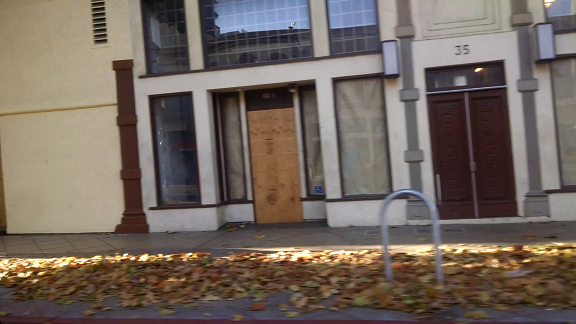 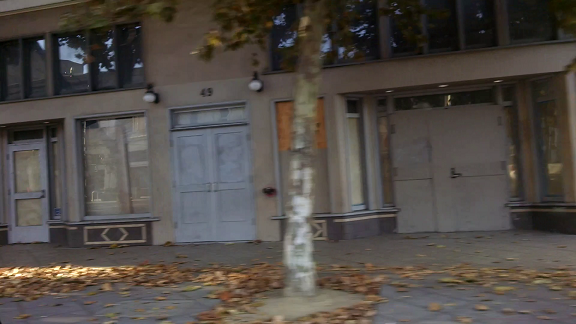