In two decades, San Jose has gone from being an up-and-coming star in Silicon Valley to being the most-broken city of its size in the nation.

Trash is piled on freeway embankments and interchanges everywhere. It remains there for years, and often catches fire. Rats scavenge freely through the debris.

Comically complicated traffic barriers are installed randomly, ostensibly to help bikers; the lanes then fill with debris that the City maintenance vehicles cannot get to because of the traffic barrier design.

Poor smaller businesses wait for months or years for permits to be approved, sometimes going bankrupt in the process, while corporate behemoths get handouts and expedited permit processing.

Institutionalized segregation gives wealthy communities amenities that are denied to the poor neighborhoods just a block away.

City Hall departments ignore service requests with impunity and act only when threatened with exposure by the media. City lawmakers are either unreachable or simply point fingers. 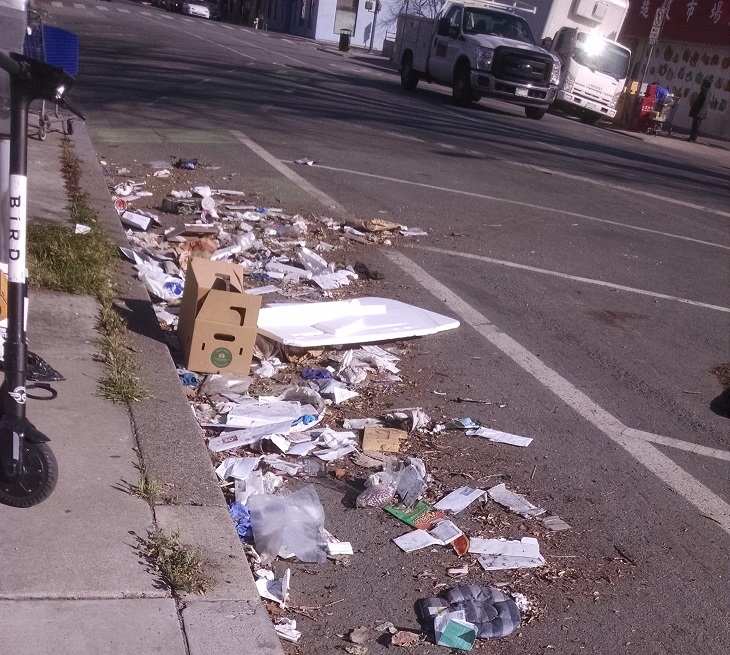 Money politics runs everything, so no department is doing anything that doesn't generate revenue for City coffers.

Downtown. Fifteen years ago, downtown San Jose was a Redevelopment success story. Now it is a place where storefronts lie empty, block after block; where exceptional dining and entertainment concepts go to die; where the drug stores, grocery stores, hardware stores, and restaurants just closed up and ran away. All before Covid-19.

Suburbs. San Jose suburbs are the shabby next-door neighbors of nearby towns - just look across a city limit line at Los Gatos, Campbell, or Milpitas to see how much cleaner the streets are elsewhere. It's not a reflection on the inhabitants, but instead due to City mismanagement of its vast wealth.

Once-pleasant subdivisions are being assaulted with massive blocks-long prison-cell-type residential developments that are set to become the slum boarding houses of the next generation.

Costly yet ineffective roadway systems still rely on traffic programming techniques from half a century ago, leaving traffic backed up even during slack times and further diminishing the benefits of suburban living.

City Hall. The effectiveness of City Hall departments runs the gamut from its A-rated refuse pickup services to its F-rated Code Enforcement division. Its Fire and Police departments merit high marks, while its Planning department has made terrible choices for decades. City Council meetings regularly run into the wee hours of the morning, where inexperienced and naïve aspiring politicians robotically approve the same failing policies that have plagued the city for scores of years.

Is this all a result of the virus? No - this has been the case for years before the COVID-19 situation took hold. Now the virus just provides a convenient excuse for City Hall dysfunction.

Is it due to lack of money? No - it's just the opposite problem. San Jose City Hall is awash in cash. Back in 2013, when San Jose was about to become the "next Detroit", drastic measures were put in place to deal with budget shortfalls. But by 2014 the regional economy was booming, reaching previously unseen heights. Yet the decay continued and accelerated.

Is there at least diligent planning and preparation going on for disasters? Hardly. In 2017, a slow-motion creek flood engulfed unsuspecting residents. Easily dealt with anywhere else, in San Jose the City Hall and the County just stood, watched, and pointed fingers at each other. When the next major earthquake comes, the Police and Fire departments will do a great job, but don't expect anyone from other City Hall departments to be organized enough to manage recovery efforts.

No, all this is due to a simplistic belief that unconstrained "development" fixes everything.

In these pages we'll discuss aspects of life in the purported Capital of Silicon Valley – how the city got to be where it is today, why more and more people are being driven to leave, and how it might be the right time for communities to take back control.

Next Up: Dismal Downtown San Jose

Tail of the Tales