Of all the departments in its City Hall, none has been a more effective contributor to the decline of downtown than the San Jose Department of Code Enforcement. This is a very harsh assessment, but is nonetheless accurate.

Here, in a single agency, you'll find all the worst aspects generally ascribed to a broader panoply of government workers:
– Inept inspectors who have been mis-trained on their purpose
– Management with no mission other than to account for the tax dollars wasted on them
– Staff with nasty dispositions that limit their ability to effectively interact with the public.
Stereotypes of lazy civil servants from TV sitcoms abound here.

What do community leaders have to say about Code Enforcement?

“A waste of space.”
“Worthless as tits on a boar hog.”
“A dismal failure.”

Even the City Auditor got in on the act, publishing a lengthy critique of agency practices back in 2013. The outcome? The department got worse still, as evidenced in this article.

As with most other departments in City Hall, Code Enforcement performance is measured solely by revenues taken in. So even with the most egregious code violators, no action is taken if it doesn't bring in money for the department.

As a result, in San Jose you can:

all with no repercussions. 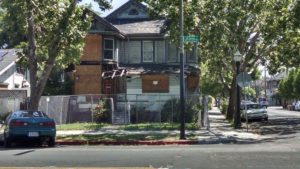 Any of these infractions would result in swift and costly action against the perpetrator in other cities, but for San Jose they don't bring in enough enforcement revenue so there's no enforcement.

Let's take slumlords as an example. Code Enforcement will impose an initial fine for blatant accumulated violations; because it's a good chunk of money ($5000 typical), it represents easy income to the City. After that, the slumlord becomes  sneakier and Code Enforcement can't make as much money from citing for smaller infractions, so the slumlord is off the hook.

Code Enforcement's mishandling of their duties has for nearly two decades been responsible for business flight and neighborhood decline that permeate downtown. How does that come about?

Code Enforcement then marks it "case closed" and gets credit for it, as part of City Hall's twisted merit system. Multiply this scenario by 100,000 and you'll understand why San Jose looks the way it does.

You can see the attitude problem just from their Web site. They changed their phone number and hide it to discourage callers. There is virtually no way to contact them - they refuse to take e-mails or photo attachments, and don't even accept letters sent by snail mail.  Their Web complaint entry is limited to a few dozen words, but it doesn't bother to warn you when you reach the paltry limit. When the automatic email response comes back to you, you'll find that most of your complaint was cut off.

During the downtown golden era that was all too brief, some bright and caring new recruits to the agency attempted to make a difference.  Most departed in disgust during the Gonzales years, leaving a surly and incompetent remainder today.

Some other departments in San Jose City Hall may be guilty of mismanagement and slipshod operation. However, San Jose Code Enforcement has completely lost its way. This particular agency is rotten to the core, as evidenced in this example. A necessary part of the solution would be to dissolve the agency, get rid of the entire tainted staff, and start fresh. Then, an updated department name like Property Complaint Response Team might help give the new operation an appropriate sense of mission.  (Perhaps you can suggest something.)

Unfortunately, the mayors and City Attorney of the last 20 years are complicit in creating the downtown disaster. City Hall is unwilling to even acknowledge the problem. let alone take action.

The Code Enforcement nightmare scenario that has unfolded in San Jose has had a pronounced effect on the real estate market.

In a normal community, housing inventory goes up and down in various cycles. Part of these cycles involves turnover of sub-standard properties. When a house or apartment becomes blighted or becomes a nuisance to neighbors in the block, the neighbors complain to Code Enforcement and the owner is forced to deal with the situation. After a few repeats of this, most slumlords give up and put their property up for sale.

In the neighborhoods of San Jose, this cycle does not happen. Code Enforcement rarely takes an enforcement action (except in wealthy neighborhoods). Slumlords thrive. Housing does not turn over at a natural rate, and does not get improved. Thus, housing inventory is kept artificially low.

Amazingly, City Hall's approach to the issue of inadequate housing is to encourage blight, overcrowding, and crime.  The end goal is to justify tearing down houses by-the-block, replacing them with large high-density apartment complexes.

So in that regard, Code Enforcement once again becomes dispensable. Why bother correcting issues one-by-one when the City can let an entire block decay and then take it over by Eminent Domain? The most recent City Attorney spent the last 20 years making this approach a reality, blessing the inactions of the Code Enforcement department along the way.

Next Up: Operating System of a Broken City